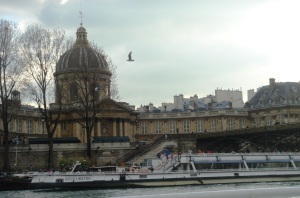 I travelled to Paris recently, on a mission to acquaint my niece with this wonderful hotchpotch of culture, history and culinary delights. It reminded me of my first visit to France, in 1988. The first time you see Paris is always unforgettable: there is so much to see, to do, to taste! The wide boulevards, the beautiful cathedrals, the Seine…! The colourful street markets, bakeries and cafes…! And the sound of French language or music – it leaves you simply mesmerised. It is almost too much in fact. 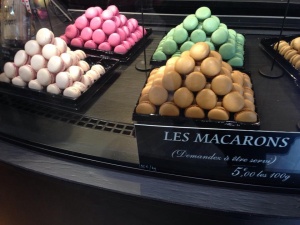 My second visit was in 1989, for a two-month language course in Dijon. This became one of the most significant journeys in my life, both because it really opened my eyes to all things French (and convinced me of the necessity of learning that impenetrable language of theirs!) and it allowed me to make some real friends that I have been lucky to keep ever since… Cooking and wine in Bourgogne naturally left a permanent memory.

What was significant with the 1989 visit of course was that it was the year of the bicentenaire, the 200 year anniversary of the French revolution. This was also part of the reason that French politics made such an impression on me as a young politics student. The home of the revolutionary ideals of freedom Liberté, égalité, fraternité was quite an interesting place even in the 1980s and 1990s and for a Finn interesting also because of the similar emphasis on Presidential power; Finland retained a similar ‘strong presidential’ system up to 2000, thereafter a semi-presidential one, as the constitutional reform enacted at that time put in place a more parliamentary system, bringing Finland into line with the West European mainstream. (For an introduction to the philosophers that made their impression on the French revolution, see: http://www.historytoday.com/maurice-cranston/french-revolution-ideas-and-ideologies, on semi-presidential systems in Europe, see: http://www.oxfordscholarship.com/view/10.1093/0198293860.001.0001/acprof-9780198293866).

As important as the political system, though is the culinary system. 🙂

I’m not even going to start on the topic of French cooking. Suffice to say, it is very easy to eat well in France. Sometimes it may be difficult to stick to a very light diet, but as has been argued elsewhere, French (women) themselves stay thin by eating well, by relying on quality rather than quantity. (See:   http://girlsguidetoparis.com/how-french-women-eat-rich-and-stay-slim/) A little qateau once in a while will not kill you, neither will enjoying some of the beautiful cheeses available. You can indulge sometimes, but not all the time. Eating is something to be enjoyed, and something that is deeply social. A survey from the mid-2000’s conducted by the French government’s Committee for Health Education (CFES) found that in France, 76 per cent eat meals they have prepared at home; the favourite place to eat both lunch and dinner is in the home, with 75 per cent eating at the family table. (See Mimi Spencer’s article on the topic in Guardian from 2004: http://www.theguardian.com/lifeandstyle/2004/nov/07/foodanddrink.features11). Those figures are hard to beat!

The stereotypical view of French cuisine suggests it is quite meat-heavy. Indeed, it was not too long ago when being ‘a vegetarian’ in France was not at all easy, but luckily this has changed tremendously (even since my first visit to France). (See for instance this excellent blog on being vegetarian in Paris, including an extensive list of restaurants: http://blog.savoirfaireparis.com/being-vegetarian-in-paris/) For the meat-eater of course France is still full of treats. Personal favorites include everything to do with duck. It is difficult not to eat well in Paris in any case. (The main courses and dessert below are from one of my favorite lunch places in Paris, Miroir at Rue des Martyrs) 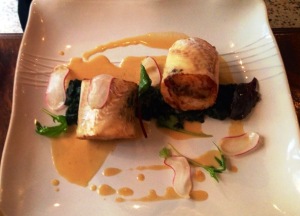 You can’t always travel as often as you would like. For those moments it is good to have recipes that allow you to travel in your own kitchen. One such recipe is for the classic little tea cakes, madelaines, made world famous by Marcel Proust’s novel ‘Remembrance of Things Past’ (original À la recherche du temps perdu).

a pinch of salt

11 g baking powder (! – yes, after decades of failed baking I’ve finally believed that the secret in successful baking is in following the recipe in detail, and measuring absolutely correctly the ingredients)

2) Brush a Madeleine tray with butter and coat with flour, then tap the tray to remove the excess flour

3) Melt the butter and let it cool

4) Mix the flour with baking powder

6) Spoon into the baking tray; place the tray in the fridge for 1 hour to cool

7) Bake for around 10 minutes, until very lightly golden. Remove the little cakes from the tray and cool on a plate 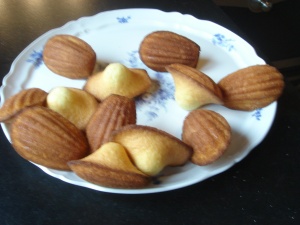 Madelaines in the Proustian sense are thought to evoke significant formative memories from the days of one’s youth. Perhaps that is part of their attraction. They are absolutely at their best eaten freshly baked, but should not be kept for longer than 4 days, according to a professional chef with whom I and my niece had the pleasure of baking in Paris recently. You can also substitute the lemon rind with other flavours: I made my first batch at home using a tiny bit of essence oils with lavender and verbena. They turned out lovely and fragrant, though not as puffy as the ones we made in Paris. They do say the madelaines are not for an inexperienced or impatient cook. 🙂 Or perhaps there was something in the air of Montparnasse that could not quite be replicated in Espoo…  Perfect little treat to share at Easter.

2 thoughts on “Liberté, Égalité, Fraternité – or savouring a little bit of France”